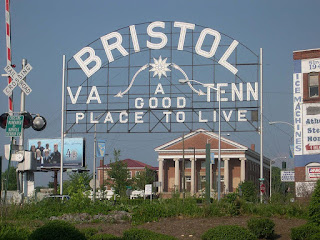 A bottle of Champagne was smashed last week on the side of the former Executive Plaza building in downtown Bristol VA, to christen the new 55-bedroom Bristol Hotel. Built in 1925, the 7-storey block is listed, but the $20million renovation will gut the place, leaving a few interior features such as the elegantly decorated lobby. The proposed rooftop bar will have views across the town, which straddles the Tennessee/Virginia border, to the Appalachian Mountains. The Hotel is being developed by McCall Capital, for Charlestowne Hotels, and is scheduled to open in August 2017.

Many of the town’s visitors come for the Birthplace of Country Music Museum, opened in 2014. An affiliate of the Smithsonian, it holds events and concerts, and centres on recordings made here in 1926–7, before Nashville, 300 miles away, got going.
at 02:44 No comments: 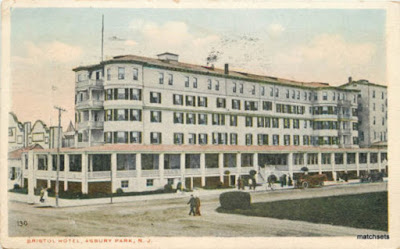 This postcard of the Hotel Bristol in Asbury Park, New Jersey, has just gone up for sale on eBay. The Bristol was one of several grand Victorian resort hotels described by Janet H. Burgents in her book Reflections of Asbury Park. They offered saltwater baths, touring cars and theatre performances, with separate meal hours for children and their nannies. This picture is dated 1922, the year before a 'mysterious' fire wiped out the hotel. 'Closed for the season, it went up in flames in half an hour taking with it the Garden Theatre, the Edgemore, Keswick and Victoria Hotels,' writes Burgents.
at 01:14 No comments:

The Bristol in Vienna is offering a luxury, €50-a-day deal to pamper pets, with choice menus, comfortable bedding and walks. We like this picture, from a report in 'The Local', which brings news about Austria in English. No matter that it's an unashamed publicity-seeking pooch.

Bristols are big in Karlovy Vary

The Bristol Group in Karlovy Vary has eight top hotels in the celebrated spa town. Once known as Carlsbad, after it was founded by the Holy Roman Emperor Charles IV in 1370, it was one of the most glamorous spas in late 19th-century Europe, and today it has been revitalised. The complex is divided into two areas. Bristol Royal is in the West End by the English Park. It comprises the Bristol Hotel, the Bristol-Palace, Tereza, Kralovska, Vila Livia and Gregory House, while Bristol Riverside in the centre of town is made up of the Kolonàda and Pavlov hotels. The Vila Tereza is the former residence of the Austrian Empress ‘SisI’ Elizabeth, wife of Franz Josef I.
The original Bristol was the Bristol-Palace (in the background of the picture above), which dates from 1890. Its many famous and glamorous guests included Sigmund Freud who met his nephew, Eddie Bernays, founder of public relations, here, and they are the background to ‘Freud’s Enema’, a chapter in High Times at the Hotel Bristol.
at 00:40 No comments: