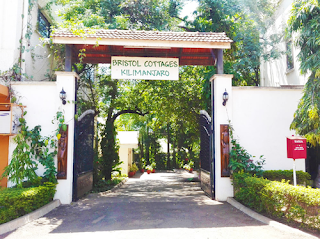 Just stumbled across Bristol Cottages Kilimanjaro in Moshi, base for climbing the Tanzanian mountain. The hotel’s 20 rooms are made up of eight cottages on the ground floor, eight standard rooms on the first floor and four large suites on the second floor. An eco hotel in plaseant grounds, it is signed up to Pack for a Purpose, in which travellers are asked to make a few kilos of space in their suitcase to take supplies for local schools and clinics. A nearby orphanage welcomes sports shoes, black flat school shoes, trousers, shirts and socks. Sizes of shoes range between 5 and 10. They also need toothpaste, soaps, toothbrushes and towels.
at 10:31 No comments:

Roosevelt at the Yalta Hotel Bristol 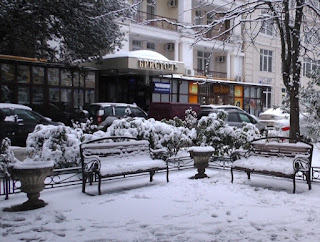 A bust of Franklin D Roosevelt is now on public display in Roosevelt Street in Yalta — the only street in Russia to be named after a US president. Yalta, of course, is where Roosevelt, Stalin and Churchill met to carve up the map of Europe at the end of the Second World War.

Commissioned in 1960 by Vyacheslav Kurashin, CEO of the Hotel Bristol, the sculpture was made by Konstantin Koshkin, and until recently was kept in the ‘museum’ of the hotel (seen here in the snow). If ever Trump visits Yalta, says the town’s administrative head, Andrey Rostenko, he will be taken down the street to look at the statue.

See the full story in Tass 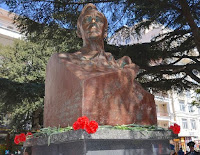 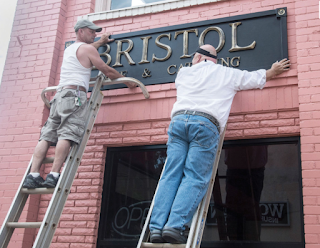 Statesville, South Carolina: Not a hotel now but a restaurant – Bristol Café and Catering is opening in May. Run by Joanie and Jeff Hustead (pictured right) it originally opened in 1889 as the Star Saloon. “This was the hell-raising part of town,” Jeff Hustead told the Statesville Record & Landmark. “It was lined with saloons; as many as two or three at a time. Newspaper articles from the era said the court would have to stop proceedings due to noise from the saloon.”
In 1917 it became the Bristol Hotel & Café, and the centenary inspired the renaming..