At last, THE Bristol Hotel in Bristol

This is not the main entrance to The Bristol Hotel in Bristol, but if you look at it closely you will see that on the first floor above this secondary entrance is a row of parked cars. In fact the hotel, which has perhaps the best waterside location the city, was built in the 1960s by Rank as a motel, called The Unicorn. The car park rises five storeys, and the idea was that you drove your car up to the level that your room was on, and there entered the hotel, without having to use lifts or stairs. In the 1990s the hotel was bought by the Irish Jurys chain and renamed Jurys Bristol hotel, and the car park was taken over by National Car Parks. At the end of last year the 187-room hotel underwent an £8 million refurbishment under The Doyle Collection (see Hotel Bristol News of December 2008), reopening in February this year as The Bristol Hotel. The choice of name was perfect. There has never, as far as we know, been a Hotel Bristol in Bristol before, and General Manager Mark Roche-Garland is adamant that this really is The Bristol Hotel, just as Hippolyte Jammet in 1925 named his Parisian hotel Le Bristol. And you can still, uniquely, park your car on the same floor as your hotel room, thus avoiding the lift and stairs.
.....All this was subject of discussion on May 22 on BBC Radio Bristol, when the morning show presenter Graham Torrington talked to Roger Williams about the hotel, High Times at the Hotel Bristol and the Hotel Bristol Project. Listeners calling in had their own stories about Bristol hotels they had stayed in. A BBC producer even confessed to hurling an alarm clock through a window of the Warsaw Bristol when watching David Beckham score a winning goal. Such shameful behaviour!

A rare German stamp showing Audrey Hepburn with her trademark cigarette holder was up for auction at the Kempinski Hotel Bristol in Berlin today. With an estimated bid of $42,000, it is only the fifth of such stamps to have been discovered. In 2001 14 million of them were printed, but they were destroyed when Hepburn's son, Sean Ferrer, objected to them. All of the stamps except for some proof copies sent to Deutsche Post for approval were destroyed. An employee snatched 30 of them and sent them postmarked from Berlin. This is one of them.

BRISTOL LOUNGE IN BOSTON
The Aujourd'hui restaurant in the Four Seassons Hotel Boston, one of the city's finest, is closing at the end of June as a result of the credit crunch, which has depleted its customers. In its place the more casual Bristol Lounge will open. Such a name is bound to attract a similarly classy clientele.

Another Prince among Bristols

Constance Creosote of Farnham, Surrey, writes: "I notice from your fascinating website that two Princes of Wales (later Edward VII and Edward VIII) were inextricably involved with the histories of hotels called Bristol. I wonder if you have any evidence that the current Prince of Wales has inherited an appreciation of Bristols."

Well, Ms Creosote, we are happy to say that there does seem to be a lingering family interest in Bristols, borne out by this recent photograph of His Royal Highness.

Angels & Demons at the Bernini Bristol

,
Angels & Demons, a film based on the book by Dan Brown, opens on May 15. Tom Hanks once again plays Robe 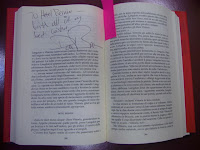 rt Langdon (as in The Da Vinci Code) and the elegant Hotel Bernini Bristol in Piazza Barbarini in Rome is where Langdon and his collaborator, Vittoria Vetra, conduct a dalliance.
...Dan Brown is a stickler for locations, but according to The Toronto Star's Paul French, he sometimes gets them wrong:
"For example, Brown's narrative identifies the Piazza Barberini as the site of the church of Santa Maria della Vittoria," says French: "Wrong."
...French reports that Stefano Gardi, doorman of the Hotel Bernini Bristol, is constantly asked for directions to the church. And Gardi has to tell them there is no church in the Piazza Barberini; the one Brown refers to is up the road.
...French concludes: "Fans of Angels & Demons will want to check out the Bernini Bristol, recently renovated and now with an elegant lounge on the roof deck. And you don't have to be a guest to enjoy a cocktail and the terrific views of the city at sundown."
...The picture here shows the relevant chapter of an Italian edition, dedicated by the author to the hotel.
Back to the latest news
at 10:35 No comments: