Where was the Bristol Hotel in Moscow? According to Masha Salazkina, author of Sergei Einstein's Mexico, the Mexican painter Diego Rivera stayed in the Moscow Bristol in 1927. It was, says Salazkina, the haunt of "well known figures in the loosely connected global network of modernist critics, collectors and promotors". According to Patrick Marnham's biography of Rivera, the artists left the hotel suddenly in April 1928 after he had clashed with the artistic authorities.

This illustration of the Moscow Bristol's "Hotel Bus" comes from Maurice A. Kelly's Russian Motor Vehicles: The Czarist Period 1784 to 1917, in which full technical details are given. Made by a company called Dux in 1902, it was run on electricity and had a top speed of 12mph, and a range of 60 miles. 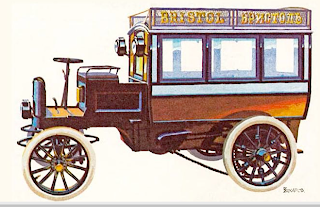 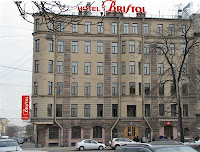 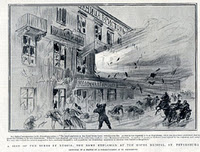 The new Bristol (left) and the earlier version, hitting the headlines in 1905

A new Bristol Hotel opened in St Petersburg last week. The three-star hotel is in Ulitsa Rasstanaya on the south side of the city, with parking facilities and a shuttle service to Pulkova airport. It has 120 rooms, with all mod cons and a restaurant specialising in game. The first Bristol in St Petersburg was by the Moika River, 4km north of the present hotel. It caught a revolutionary's bomb in 1906, though nobody was killed, but it did not survive the Revolution (See Hotel Bristol News)
at 04:41 2 comments: