"The Kempinski Hotel Bristol Berlin remains the premier hotel in western Berlin" according to a recent report in Conde Nast Traveller. The Kempinski opened in 1952 as the first modern 5-star German hotel. But it wasn't the first Berlin Bristol, of course. The pre-war Bristol, bombed out in 1943 with the loss of some 200 lives, was in Unter den Linden, where the Russian Embassy now stands. It was very much associated with its owner Conrad Uhl – in fact during the First World War, when all English names were eradicated from German businesses, it was called simply the Conrad Uhl. This pre-war poster, from 1910, recently went on sale at Amazon. 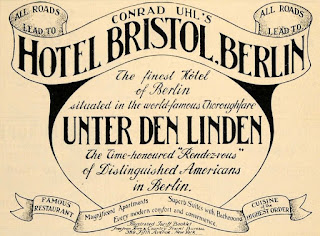 The Bristol was where the rich and famous stayed when they visited the city. Among Conrad Uhl's delicate tasks was to deal with the boys from Capri that arms manufacturer Fritz Krupp brought to the hotel -- the story is told in "Krupp's Dying Shame", one of the tales from High Times at the Hotel Bristol.
at 02:50 No comments: 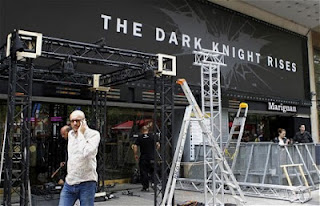 The star-spangled Paris premier of The Dark Knight Rises was cancelled on Friday as news of the massacre by the murderous Batman figure in Aurora reached the city. Staying at the elite five-star Le Bristol, the film's stars, Christian Bale, Anne Hathaway and Marion Cotillard immediately abandoned publicity interviews. According to the rolling news on The Daily Telegraph website, there was "total confusion" at the Bristol where a French journalist reported, "The mood caused complete panic. All the publicists and other movie staff were taking calls and shouting, while actors and actresses returned to their hotel suites."
Film fans continued to hang around Le Bristol waiting for autographs from the stars, but on Saturday they decamped, according to the NY Daily News, "sneaking out through the parking garage in a fleet of black cars with tinted windows without saying a word to clueless fans cooling their heels on the sidewalk."
The picture here shows the dismantling of the premier cinema venue. Doubts were raised about the film's planned national distribution, due on July 25.
at 10:39 No comments:

Hotel Bristols from the past 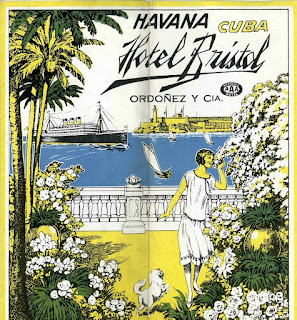 Two images surfaced recently on the net. The Hotel Bristol in Havana, Cuba, produced a number of cards and labels. But this one is different: a fresh looking image of a holiday resort of the 1920s. The distinctive, angular script typeface of the hotel name was often used on its publicity material. The hotel was advertised as a fireproof building with 100 rooms.

The Hotel Bristol in Carrasco, a suburb of Montevideo, Uruguay, no longer exists. But it looks as if it might have been a happy family holiday resort, with a beach, Playa Bristol, named after the hotel. Perhaps that was before Carrasco airport was built in 1947 to serve the capital.
at 05:40 No comments: