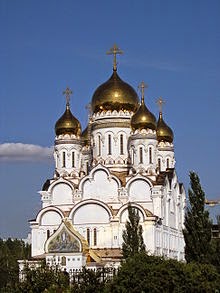 The Transfiguration Cathedral, pictured here, in the manufacturing city of Talyatti in Russia was completed only in 2002. In fact the whole city has replaced Stavropol-on-Volga, which disappearerd with the building of the Kuybyshev Reservoir in 1950. The new city took its name from Palmiro Togliatti on his death in 1964 after 37 years as leader of the Italian Commumust Party. Another name to be adopted is Bristol, in the Hostel Bristol, which offers accommodation in two double and two single rooms.