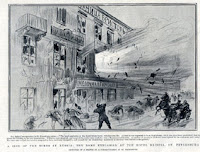 "A SIGN OF THE TIMES IN RUSSIA:
THE BOMB EXPLOSION AT THE HOTEL BRISTOL, ST. PETERSBURG"
This was a story in the Daily Graphic on March 25, 1905. The report beneath the illustration read:
"The bomb explosion at the hotel here shook the building to its very foundation. Windows were smashed, and some of the walls were cracked. The man who carried the bomb is supposed to have carelessly dropped it, and he paid for his blundering with his own life. At first he was reported to be an Englishman, but it has since been established that he was a revolutionist. A number of people in the hotel were injured by the explosion, and many passers by were hurled to the ground."

The St Petersburg hotel survived, and on the eve of the Revolution 11 years later, "The Bristol, a four-ruble-a-night hotel on an avenue of leafless chestnuts, had been commandeered for the Stavka, the supreme army headquarters. The tsar took his daily walks by the River Moika with his English setters. In the evening he watched movies. His favourite was a 22-reel detective serial called "The Secrets of New York." This come from Brian Moynahan's biography of Rasputin.
The Bristol is no longer there. Other smart hotels like the Kempinski and the Pushkin have taken its place. But in 2012 a new Bristol opened on Ulitsa Rasstanaya in St Petersburg (see New Bristol in St Petersburg).

Before the Revolution there were a number of Bristols in Russia, and in any shtetl you might find a four-rouble-a-night Bristol. The handsome Bristol in Odessa, built in 1899 by the Italian architect Alexander Bernardazzi, changed its name during Soviet times to the Krasnaya, meaning red or beautiful, as in Krasnaya ploschad, Red Square. Recalling its former glory, this grand hotel in the Black Sea resort has now become the Bristol again.

GOODBYE SHEFFIELD The 111-room Hotel Bristol in Sheffield, which was given its name by the Bristol businessmen who founded it, has just been bought by the fast-expanding Swedish Rezidor Group, and from November 7 it will be renamed the Park Inn.

HELLO RABAT Meanwhile a new Bristol is to be built in Rabat, Morocco, the first overseas enterprise by the Brazilian Bristol hotel chain, which operates 21 hotel and apartment blocks with the Bristol name in the Brazilian states of Minas Gerais, Espitito Santo and Goiás. The north African venture will have 3–4-stars with 96 one- and two- bedroom apartments, and will take around 18 months to build.

GOING UP IN KARACHI Pakistan's first six-star hotel is being built in Islamabad . The Avari Islamabad will be an all-suite hotel, and the first 200 are to be ready by early next year. Making the annoncemen, the Avari hotel group chairman Byram D Avari, said that the Avari family had been known in the hospitality industry since 1944 when his father purchased the Bristol hotel in Karachi.

LEAVING LEBANON "Many clients have left,” says Chantale Zammar, sales manager of the famous Le Bristol hotel in Beirut. “And now we have foreign journalists who always come in times of trouble, like last year during the war between Israel and Hezbollah.”

Jan Morris & the Bristol of Hav

The latest Hotel Bristol to crop up in fiction appears in the imaginary eastern Mediterranean city created by the travel writer Jan Morris and revisited in her latest book, Last Letters from Hav, just published in paperback.

The Grand Hotel Bristol Rapallo is currently researching a history of the hotel and finding that, like most hotels, few records have been kept – new managements tend to clear out old papers wholesale. It is an historic hotel, inaugurated in 1911, and the British Foreign Minister Austen Chamberlain met Benito Mussolini here in 1927. One of the hotel’s two restaurants is named after Chamberlain.

The earliest known existing hotel called Bristol is thought to be the Bristol in Rome, now the Hotel Bernini Bristol.It opened its doors in 1874 and claims to be named after the 4th Earl of Bristol, who spent time in Rome acquiring artworks for his house at Ickworth in Suffolk. It was an instant success, attracting nobility and royalty.

It has been suggested that the novelist Jane Austen stayed at a Hotel Bristol in Cork Street, Mayfair, London, in 1796. From here she wrote to her sister of her alarm at arriving in the capital:
Cork Street, Tuesday morn [August 23]
My dear Cassandra
Here I am once more in this scene of dissipation and vice, and I begin already to find my morals corrupted...

Mayfair at this time catered for passengers from the West Country, particularly Bristol and Bath, many of whom stayed in lodging houses, male preserves that resembled sporting clubs. Despite the speculation, there was no hotel called Bristol in London until one opened on the corner of Cork Street and Burlington Gardens in 1874 – the same year as the Bristol in Rome. It is likely Jane Austen was lodging with a relative.