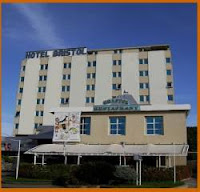 Just when I thought I had every Hotel Bristol in the world, I stumbled upon the Hotel Bristol in Barinas, in Venezuela. I should have known – it has been there since two Italian immigrants put up the money in 1979, opening the doors in 1981. It is a three star hotel with 69 rooms and conference facilities. Barinas is in the west of the country, capital of the vast tropical plain called Los Llanos, and has a population of around 250,000. I came across it on Twitter. It was following one person, and had one follower. Now it has two. I have added it to the list of All Bristol Hotels

New EU Thon is not a Bristol 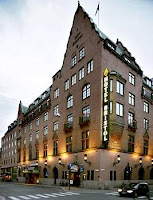 A new Thon hotel is opening in the European Quarter of Brussels later this month, but it won't be another Bristol. Olav Thon, the colourful Norwegian property billionaire, already has three hotels called Bristol, one of them in Brussels – the Hotel Bristol Stephanie, which he bought in 1995. His first hotel acquisition was the historic Hotel Bristol in Oslo (pictured) in 1974, and in 1998 he bought the Hotel Bristol in Bergen. The new hotel in Brussels, the Thon EU, has 405 rooms, which will use mobile phone keys.

The wealthy Mr Thon is reported to have once said that one day he would like to take over the Hilton Hotel chain, which would simply be rebranded as Hilthon hotels.

Jazz on a Cold Winter's Night, a story from High Times at the Hotel Bristol, is set in the Oslo Bristol.
at 05:26 1 comment: