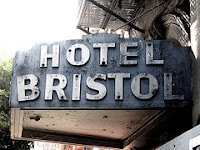 The fate of the Los Angeles Bristol finally seems to be sorted. According to blogdowntown the boarded-up hotel, once destined for a boutique overhaul, has been bought by a group that intends to return the structure to affordable housing. Eric Shomof of Pacific said that the partners in his firm had done the deal as Bristol 423 LP. They plan to renovate the building and operate it as Section 8 housing.

* A nice story about the late Natasha Richardson at Le Bristol in Paris, posted by Joan Juliet Buck...

* The Bristol Buenaventura, a luxury resort hotel, has just opened in Bonaventura on the Pacific coast 80 miles west of Paname City. It's an offspring of the capital's famous Bristol Hotel.

The story of the criminal activities of the Victor Hervey, 6th Marquess of Bristol, whose ancestor gave Bristol hotels their name, was told on Channel 4 on March 2, 2009, as part of their Toffs and Crims series. Titled 'The Real Pink Panther', it centred on his activities as a Mayfair jewel thief, gun-runner and fantasist, and it showed how he disgraced his title and dissipated the Bristol family fortunes. Last April, Hotel Bristol News reported on the release of police papers about his suspected activities, and researchers of the programme were assisted by a copy of High Times at the Hotel Bristol. The book documented these activities in Paris Hilton and Lady Victoria Hervey, a story from the book that can now be read on line.
In the film Hervey was played by Stephen Clarke, who is pictured here outside Ickworth House, the family estate that he squandered. Our Critic, Tim Arnold, writes: "Terrible actor! Silly man!!"
Back to the latest news
at 14:35 No comments: