.
• A new Hotel Bristol has emerged in Bristol, England, as the Jurys Hotel Bristol drops its “Jury’s” after an £8 million refurbishment. The Jurys hotel group, which has 11 hotels in the UK, Ireland and the US, is now to be called The Doyle Collection. Mark Roche-Garland is General Manager of the 187-room 60s dockside hotel.

• The Bristol Hotel in Campbell/San Jose California is up for sale for $6 million. Built in 2000, this 5-star boutique hotel with marble bathrooms and classic cherry furniture has 47 rooms.

• The Kempinski Hotel Bristol in Berlin is spending 5.5 million euros on restoration of the landmark hotel’s Tower. Two Deluxe Suites are also being designed in Art Deco style on the 10th and 11th floors, to add to the 514 sq m Presidential Suite that occupies two floors. It should be completed by February.

• Actor Simon Callow told the Daily Telegraph in an interview that the Hotel Bristol in Vienna is his favourite hotel – he has stayed five times. He said: “Last time I was there I stayed in a suite that puts one in mind of Mayerling – the hunting lodge where the Archduke Rudolf, Crown Prince of Austria, killed his mistress before committing suicide.”

• BBC Radio 4 had a play just before Christmas about PG Wodehouse’s incarceration in Le Bristol in Paris during World War II, an event touched on in Suha Arafat and the Hope Diamond, a story set in the hotel in High Times at the Hotel Bristol, which can be read online.

• Le Bristol in continues to win accolades: four important ones this year: ‘World’s Best Hotel’, ‘Europe’s Best Hotel’, ‘World’s Best Luxury Romantic Hotel’ and ‘Europe’s Best Hotel Restaurant’. Innovations have included its own fragrance, for scents and candles, concocted by Jean Michel Duriez, head perfumer at La Maison Jean Patou, and the provision of a complimentary Smart Car for guests who want to go shopping.
Back to the latest news
at 07:36 No comments: 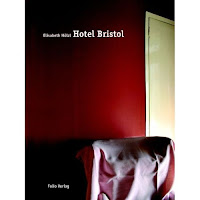 Hotel Bristol, published by Folio Verlagsges, documents the death throes of the hotel in the mountain spa town of Merano, near the German border in Trentino Alto-Adige. Photographer Elisabeth Hölzl, who was born in the town in 1962, spent two years taking pictures of the abandoned Hotel Bristol and its gradual demolition. The hotel was famous before the war, and re-opened in 1954 as one of the most modern and elegant in Europe. It was refurbished by its owner, the Genoan shipbuilder Arnaldo Bennati, who wanted to turn Merano into a second St. Moritz. According to a catalogue for an exhibition of the photographs published online by Berlin's Galerie artMbassy, "The Bristol reflects the decline of a decadent Habsburg Monarchy, the megalomania of of Mussolini’s fascism, the infamous treaty of 1939 between Hitler and Mussolini, the brief sparks of Italian national pride in South Tyrol after World War II, and mass tourist invasion that radically changed the face of the Alps. Stars and starlets, gamblers and speculators, Europe’s moneyed aristocracy, and a future pope – they all appeared at the Bristol."
. For 15 years, the Bristol, in the middle of the town, stood empty – "Its white marble was filthy, its shutters hung crooked, its windows were as blunt as blind eyes. In 2006, the excavators and pneumatic hammers shattered the last residues of a dream. Buildings are designed as strong images that must be replaced by others as soon as they have lost their signal character... They are like old ocean liners – no one would bother restoring or converting them. After they have been used, ships become scrap metal, and hotels are gutted and torn down."

(Arnaldo Bennati was not entirely unsuccessful as a hotel owner. In the 1930s he bought the Bauer Hotel in Venice, which today is run by his granddaughter)
Back to the latest news
at 06:02 No comments: