The Bristol Bar in the Bristol Hotel in Vienna has just reopned, the first part of a major overhaul of the five-star hotel.

The Bristol Bar is "indisputably"  one of the most favourite meeting places in Vienna for both guests and visitors, according to Hotel director Gerald Krischek. The main features of the Bristol have survived the renovation, which included furniture restoration and leopard patterned carpet flooring, plus a new lick of paint.

Opposite the state opera house, the hotel is known for its musical connections. This snippet comnes from The Spectator of June 1929:

"As we sat in the restaurant one evening, at the Bristol Hotel, enjoying the music after the hard work of the day, a particularly exquisite melody was being played. On asking the name of the composer, to our surprise we were told it was the head waiter."

The hotel is the subject of 'High Noon for the King's Moll' - a story in Hight Times at the Hotel Bristol. 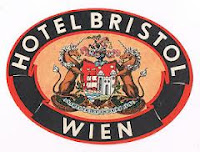