A painting by the Polish artist Wojciech Kossak has been stolen from the Bristol Hotel in Warsaw. Kossack (1857–1942) came from a family of painters, and he specialised in battle scenes and equestrian paintings. This self-portrait is in the National Museum in Warsaw. For some years he had an atelier in the hotel, paying for his rent with his paintings, which lined the walls of the restaurant. The painting that has been stolen was in the lobby, and was cut from its frame. It is said to be worth 30,000 euros.
at 07:58 No comments: 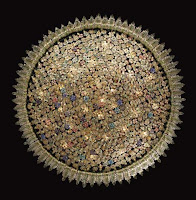 ANOTHER souvenir from the former luxury Hotel Bristol goes under the hammer on December 15. This Murano glass chandelier, manufactured by Seguso Vetri d'Arte in 1954, is more than 8ft (250cm) in diameter. Three were commissioned for the hotel, two have survived. Auctioneers are Phillips de Pury of New York, who have put an estimated price of $80-120,000 on the piece.

• In September a pair of 1938 Gio Ponti chairs from the Bristol in Murano came up for sale at Wrights auctioneers, with an estimated price of $3,000–5,000 – they sold for $13,750.
• The hotel is the subject of a handsome book called Hotel Bristol, by photographer Elizabeth Holzl, mentioned in an earlier post

Also for sale, on eBay, Russian stamps with an image of Tsar Nicholas, postmarked "Hotel Bristol Ekterinaslav
at 06:00 No comments: