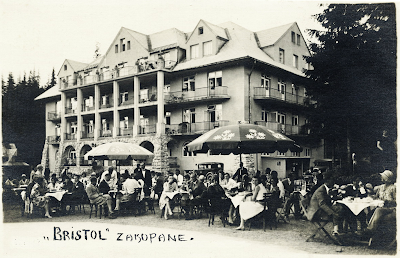 In its 1930s heyday, the Hotel Bristol in Zakopane, Poland, was a lively place. At one time it was run by Adam Chrzanowski, and his wife, the writer Stefania Laudyn, who together had founded the New York’s Kuryer Naodowy, and their guests included Joseph Conrad and Artur Rubenstein. This picture is taken from a series of photographs from the time, published online by Interia Nowa Historia that shows the town of handsome wooden buildings and cheerful holidaymakers. Situated in the south of the country by the border with Slovakia in one of the most beautiful parts of the Tara Mountains, it is still a popular summer hiking and winter skiing resort. After the war the building was nationalised and became a holiday home. In 2013, after it had been lying derelict, the local council decided to sell it. The buyer, just announced, is Sheraton Starwood, and they plan to turn it into a 97-bed hotel, opening in 2020. It will drop its historic Bristol name, and be branded The Four Points by Sheraton Zakopane, a companion to the the Four Points by Sheraton Warsaw Mokotów, planned for the Polish capital in 2019.
at 02:21 No comments: 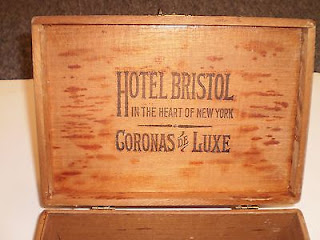 This has just popped up on eBay. The 145-room New York Bristol, on Manhattan's West 49th Street near Radio City, was a landmark hotel in the city, and its Pink Elephant Bar a popular hang-out. There's lots of stuff that come ups on eBay from the hotel -- matchbooks, ashtrays, beer mats, keys, brochures, postcards. This is the first time I have seen a cigar box. The hotel features in 'The Lonely Doll and the Castor Oil King', a story in High Times at the Hotel Bristol.
at 03:14 No comments:

Karachi Bristol and the Avari family 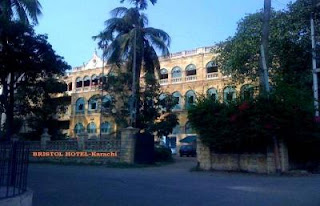 The Bristol Hotel, pictured here, was one of the best-known hotels in Karachi. It was built in 1904 for the Raj and was known for its parties and good food. In 1941 it was bought by Dinshaw B Avari, a Parsi, but after partition it was requisitioned, as no business was allowed to be run by an Indian. His son, Byram D Avari, is now chairman of the Avari Group, whose top-class hotels include Avari Towers, one of Karachi’s tallest buildings and the only five star hotel in Pakistan. He is also Social Head of the city’s Parsi community, who practise the Zoroastrian faith. In an article on minorities in today’s Express Tribune, he recalls his father's treatment:
“Today in Pakistan, we as a minority don’t experience any such discrimination.The honour, the respect and the equality we as a Parsi minority enjoy with the majority community has today made us shine out because Pakistan acknowledges the Parsi contribution."
The Bristol was bought in 1960 by Rizvi Sahab, who ran it until 1994, when it closed.