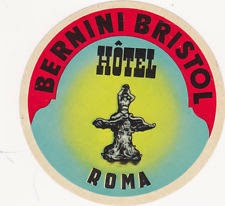 The Bernini Bristol in Rome celebrated its 140th birthday on October 29 with a 140 euro meal for two in its fabulous rooftop restaurant, Olimpo, on the eighth floor with 360-degree city views. The 127-room hotel is the oldest surviving hotel with the Bristol name. Opened in 1874, it was built for Prince Barberini, and taken over by the Corsini, though it was completely rebuilt in the 1930s when the original palazzo was demolished and replaced by the current eight-storey building.