The Orbis Hotel Group, which grew out of the former Polish state tourism organisation, has sold Warsaw's Hotel Bristol for €19.5 million. The landmark property has been bought by Rosmarinus Investments, a British company that has an interest in the firm that leased the hotel from Orbis, Royal Starman Bristol. The Hotel Bristol has been operating as part of the Starwood Hotels & Resorts chain. It was brought up to date in a joint venture between Rocco Forte and Orbis, and was opened by Margaret Thatcher in 1993. The event features in 'Lady Thatcher's Finest Hour' - one of the engaging tales in High Times at the Hotel Bristol.
at 10:46 No comments: 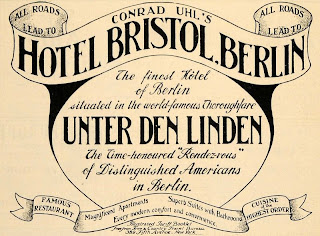 This month celebrates the 110th IAA Cars Frankfurt, the motorshow held in alterate years with the Paris Show. The first IAA was held in 1897 when 8 cars were put on display at the former Hotel Bristol in Berlin's Unter der Linden. The story of the city's famous pre-war hotel is told in"Krupp's Dying Shame", a chapter in High Times at the Hotel Bristol.
at 04:48 No comments:

Steamboat Springs Bristol to have a new look

The Bristol is one of the best known hotels in Steamboat Springs, Colorado. A boutique hotel with a homey atmosphere, it was built by – and named after – Evertt Bristol, a local bigwig, in 1948. Its distinctive clapperboard exterior is soon to disappear, however, according to the Steamboat Pilot & Today. The plan is to replace it with a bricks-and-mortar facade, which will make it more in keeping with the rest of the buildings on Lincoln Avenue.  The work is being carried out by the Mountain Architecture Design Group, though the lobby and rooms, in Western style, will remain.
at 02:33 No comments: