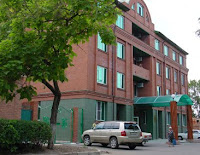 So, Russia has once again decided to allow certain areas of the country to run casinos. The move has been hotly debated in the country, and we don't want to get involved in the debate. All we'd like to pass on is the fact that the Hotel Bristol in Yelsk (or Elsk, it gets transliterated a lot different ways), in one the of the chosen regions, is offering a discount on its rates to gamblers. The 36-bedroom 3-star Bristol, pictured here, is a modern business-oriented hotel, but the original Bristol in this trading port on the Sea of Azov opened more than 100 years ago.
at 14:49 No comments:

Bristol hotels crop up a lot in fiction. It is a landmark in Jan Morris’s convincingly real Mediterranean city state of Hav (“You desperately want the place to exist,” said the Observer book reviewer. “with all its idiosyncrasies - the snowberries that ripen only 'when the early spring suns melt the last of the escarpment's winter snows'; the lethal Roof-Race which is to the people of Hav 'as the bull-running is to Pamplona'."

Roald Dahl had an invented Bristol Hotel in Cannes, in his story Skin, broadcast on BBC Radio 4 just before Christmas. It was a double bluff, as the fact that there is no Bristol hotel in Cannes provided a punchline to the tale.

The Bristol hotel 'in a large city on the Atlantic coast' of America is also the setting for “A Night at the Bristol Hotel” This “ancient edifice of four stories, weather-darkened and squeezed on every side by the overgrowth of the great city....” provides the backdrop for spooky short story that has just been published on a blog by Norman A. Rubin.

And there is City of Ghosts, a story about the Capsis Bristol in Salonica, where Tom Cotton found himself one Easter weekend.

Christmas in Bristols past

.
150 years ago On Christmas day 1859 the poet/painter Edward Lear arrived at the Hotel Bristol in Marseilles after a rapid journey across France on the new railways system: "Suffered from heat & cramps at first but wore thro' the night to Dijon at 2½ , & at Lyons by 6½. After that the weather cleared, & I read and looked out of windows at the mountains beyond Valence. All the better for it and afterwards the olives and stones. But the afternoon clouded and became wet. At Marseilles by 3½ . No bother with luggage. Came to Hotel Bristol, washed & dressed by 5 – table d'hôte dinner tolerable. 2 sets of English & a very nice fellow, Dr Chisholm, from India. Came to bed @ 9 and slept well."
There was still a Bristol Hotel in Marseille, at 18 Canabiere (pictured) up until around the 1960s, but there is no longer one there now. 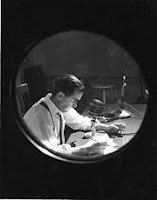 70 years ago On Christmas day 1939 the veteran US journalist Ed Murrow (left) gave his regular 5-minute broadcast from Warsaw: "For reasons of national as well as personal secucrity I am unable to tell you the exact location from where I am speaking," he told his American audience on NBC. "Spread out beyond the roof before me is a vast sea of darkness, patchily illuminated by burning buildings... Off to the west is a line of fire that marks the location of the battle line between the German and Polish armies, a line marked by the muzzle flashes of artillery, flares hanging in the air between the two armies and burning buildings that have been struck by shells. That line goes off beyond the horizon in either direction, reaching all the way to the Lithuanian border in the north and all the way to the Czechoslovak border in the south."
.....In fact Murrow was speaking from the terrace outside the Paderewski suite in the Hotel Bristol, still a high spot in the city.
at 03:35 No comments:

Scandal of the Bristols 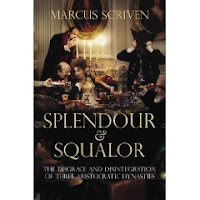 .
"The disgrace and disintegration of three aristocratic families" is the sub-title of a new book, Spleandour & Squalor by Marcus Scriven, and it is no surprise to see that the Bristols are one of the three. The fortune of the family that gave its name to the hotel trade was most spectacularly dissipated by John Hervey, the 6th Earl, who is said to have spent £7million on drugs, for which he was at one stage jailed. You can read about him in "LL Cool J and the Man who Shot Andy Warhol", chapter 7 in High Times at the Hotel Bristol. He did, however, not stand much of a chance, being the son of the Victor, the 6th Earl, who had also put in time for robbery and was, according to Scriven, the inspiration for Evelyn Waugh's Basil Seal Rides Again: Or, the The Rake's Regress. Victor's story is told in Paris Hilton & Lady Victoria Hervey, which can be read on-line.
Return to latest news
at 02:50 No comments: