Now you can get married at the Newquay Bristol 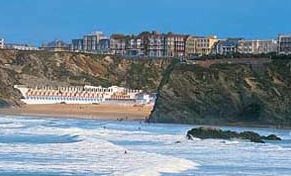 The Bristol Hotel in Newquay, Cornwall, has acquired a licence for civil marriages. The 74-bed hotel (the redbrick building in the picture, above Tolcarne Beach) has been in the hands of the Young family since 1927. It was founded by Howard Young and his wife Minnie, after he returned from his travels on the Continent, where he had seen a number of smart hotels called Bristol, and thought the name would add caché. In the Second World War the girls of Benenden School in Kent were evacuated here, and they have held reunions here since. The private school is one of the most expensive in the country (£9,980 a term), and its former pupils include Princess Anne, the actress Rachel Weisz and Lady Victoria Hervey, descendent of the eccentric Frederick Hervey, 4th Earl of Bristol, after whom it is said the first Bristol hotels were named.
Read Paris Hilton & Victoria Hervey - a chapter from 'High Times at the Hotel Bristol'.
at 05:22 No comments: 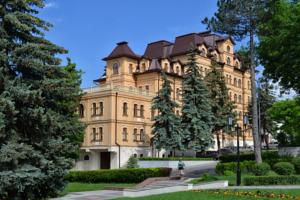 The Hotel Bristol rises again in Pyatigorsk in the Caucasus. The town, with a population of around 150,000, is one of the oldest spa resorts in Russia. Its waters were nationalised by Alexander I at the beginning of the 19th century, and at the start of the 20th century the town had another Hotel Bristol but it did not survive the Soviet revolution. The Spa Hotel Bristol is an historic building, and it continues the tradition of water treatment.
at 10:42 No comments: 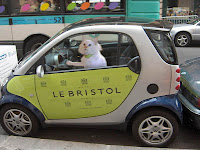 Fa-Raon, a snow-white Burmese cat, plays host at Hotel le Bristol in Paris and has been doing quite a bit of promo work. Often seen around the hotel, he writes his own regular diary. about the hotel, and was recently interviewed by the hedonost's guide, Hg2. He is pictured here in one of the hotel's cars, which can be hired by guests.
at 09:30 No comments:

How Albania made a king at the Paris Bristol 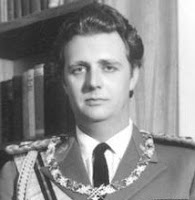 Many things have occurred in Bristol hotels -- births, deaths, marriages. But a coronation must surely top them all. Leka Zogu (pictured here) was proclaimed King Leka I of Albania by his countrymen in exile in a function room at Le Bristol in Paris on April 15, 1961. This followed the death of his father, the self-proclaimed Zog I, who had been living in exile since the Italian invasion of 1939.

News of the event comes with the announcement of Leka's death yesterday (November 30) in a hospital in Tirana at the age of 72. He had been born in Albania's capital just a few days before the family went into exile, and spent much of his life in South Africa. In 1997 a referendum was held on the monarchy, which was defeated by two-thirds of the vote. After vigorously protesting the legitimacy of the result, he left the country, returning to live there in 2002, two years before his Australian wife, Susan Cullen-Ward, died. He is survived by their son, also called Leka, who works in the foreign ministry.
at 04:33 No comments: