Polish millionairess Kinga Legg was battered to death with a gilded lamp in the bathroom of Room 503 on the fifth floor of Le Bristol, the five-star Paris hotel, on May 26, 2009.
Ian Griffin, the man who shared her room and subsequently went on the run was captured in England shortly afterwards. He has been in Wandsworth prison ever since, undergoing psychiatric tests, and is reported to have attempted suicide several times. The courts have now ruled that he is fit to stand trial and he will be extradited to France.
The full story behind the murder can be read in Crime Magazine
at 04:06 No comments: 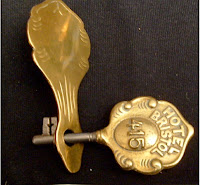 This item from the famous Oslo Hotel Bristol has just gone up on eBay. It says it is a "vintage brass skeleton room key and fob", and the current bid stands at $19.95.  It's hard to work out what exactly we are looking at. Sticking out at the side, the fob is rather ungainly, but it is apparently stamped with the same room number – 415 – and must have been made all of a piece because the two parts cannot now be separated. Usually fobs are something you can hook on to, but how do you "wear" this key? Clever, though, to give it a room number. No-one would suspect it could open every door.
at 05:15 No comments: