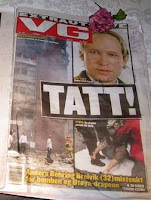 The offices of Norway's biggest selling tabloid, VG (Verdens Gang, owned by Shibsted), were badly damaged in the car bomb blast in Oslo on June 22, which killed eight people. The glass-fronted and glass-roofed building in Regjeringskvartalet (the government quarter) lies opposite the government buildings where the blast occurred.
Kristine Lowe, who works on the paper, reported: "The staff was evacuated not once but twice during the afternoon and evening – first from VG, then from its temporary workspace in Shibsted's headquerters."
In the end the company hired six suites in Oslo's Hotel Bristol, where they bought the computer equipment necessary to lay out their stories and get them to the printers. This is the paper (left) they produced for the following morning.
"It was incredibly professional," says Lowe. "I am impressed by the paper they put together under trying circumstances." 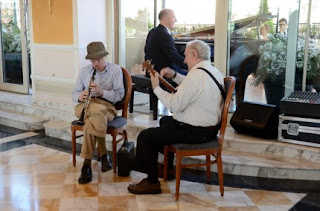 Under the title "Woody Allen Soothes Rome with the Magic of Music" Socialite Life has published pictures of the American filmmaker in the Bernini Bristol Hotel in Italy's capital. He is in Rome to make Bop Decameron, with Ellen Page and Jesse Eissenberg, due for release next year. Allen clearly has a penchant for Bristol hotels... As reported in May, his latest movie, Midnight in Paris,was largely shot in Hôtel le Bristol in the French capital.
The Bristol in Rome opened its doors in 1874, and is thought to be the oldest Hotel Bristol still functioning.
at 02:14 1 comment: 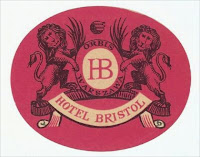 Teresa Ferguson, a retired journalist from Warsaw has just returned to the Hotel Bristol after 22 years, and she describes her visit, and her memories of the hotel, where her mother was a receptionist in 1955, in her blog: Bristol Hotel in Warsaw – Walking the Memory Lane. As a child she spent days in the hotel behind the receptionist's desk, and attended Christmas parties. When she attended Warsaw University she used the Bristol Cafe, which was a popular student hangout. On her recent return to a quite different Warsaw, she writes: "All this mottled crowd, all this freedom, replaced the drab, silent and sad world that I had lived in, it seemed, only yesterday, and I thought about how different my life and my chances would have been were I a student now."
A tale about Lady Thatcher opening the revamped Warsaw Hotel Bristol in 1993 is told in 'Lady Thatcher's Finest Hour', a chapter in High Times at the Hotel Bristol.
at 01:46 No comments:

Isaak Babel (1894–40) is remembered this year at the Odessa Literary Festival in the Odessa Museum on July 7, when a statue of him will be unveiled. Participants in the festival are being accommodated in the Hotel Bristol. Babel, the author of Odessa Tales, claimed that Odessa had 'more charm than any other city in the Russian Empire'. According to Lonely Planet: "That's probably still true in modern Ukraine. The course of this charm is the Odesans themselves: a breed apart, they're stylish, cultured, funny, savvy, and not easily impressed.' Odessa Tales describes the lives of Jewish gangsters in the city before and during the Revolution, which brings to mind George Soros, who once said that Ukraine gave corruption a bad name.
at 11:29 No comments: