This pair of 1938 Gio Ponti chairs come from the once-famous Hotel Bristol in Murano, Italy, and are up for sale at Wrights auctioneers, with an estimated price of $3,000–5,000. The hotel is the subject of a handsome book called Hotel Bristol, by photographer Elizabeth Holzl.

• The four-star Hotel Bristol in Budapest,  Hungary has just been voted one of Eastern Europe's Top 10 hotels under £30, according to research by Trivago, which carries out price comparisons.
at 10:23 No comments:

Icelandic saxophonist Joel Palsson has posted a new tune on MySpace, titled Hotel Bristol. This is, to my knowledge, only the second time Hotel Bristol has been used in music - the last time was raper LL Cool J's song about a mythical Hotel Bristol in New York's Queens, which is described in the chapter "LL Cool J and the Woman who Shot Andy Warhol, in High Times at the Hotel Bristol.  The BBC were going to play the rapper's track when they last interviewed me, until they heard the lyrics, which are not quite fit for family listening.
at 23:50 No comments: 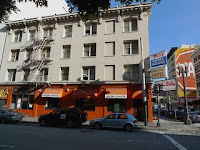 San Francisco's nastiest serial killer, Richard Ramirez, nicknamed "The Night Stalker" stayed in Room 315 of the Bristol Hotel (pictured) in the Tenderloin district. The story has resurfaced in Tenderloin, which recalls how he was captured when one of the staff recognised him from a police sketch. Ramirez murdered people in their beds and left satanic symbols daubed on their walls. A pentagram was painted on the bathroom door of Room 315 and police took it away. In the same hotel at this time was Valerie Solanas, would-be assassin of Andy Warhol, whose story is told in "LL Cool J and the Woman who Shot Andy Warhol", chapter 7 in High Times at the Hotel Bristol - now available as an eBook.
Solanas died in the hotel, aged 52, in 1988. Ramirez is on Death Row in San Quentin prison, awaiting execution.
at 06:48 1 comment: