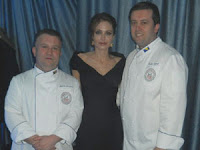 To celebrate the premier of her film In the Land of Blood and Honey, on February 14, director Angelina Jolie and her husband Brad Pitt entertained around 30 guests to dinner at the Hotel Bristol in Sarajevo where they were staying. The meal included traditional Bosnian dishes and was organised by the hotel's manager, Nermin Hodzic and chef Debartolijem Moreno. The 4-star Hotel Bristol reopened in June 2011, and was reported in Hotel Bristol News.

The Bristol Hotel on Rab Island 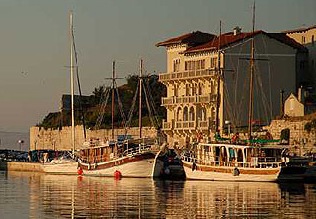 Guests at the sumptuous waterside four-star Hotel Arbiana on the Croatian island of Rab may wonder how the Cocktail Bar Bristol got its name. The fact is that when the hotel was built in 1932, it was called the Bristol. Four years later, Wallis Simpson and the Prince of Wales arrived on the island and bathed naked on a discreet beach, establishing the island's reputation for naturism. Their voyage is told in "High Noon for the King's Moll", a chapter in High Times at the Hotel Bristol. The chapter can be read online. The hotel's name changed during the Communist years, though not all Bristols were erradicated in Yugoslavia. In Skopje, Macedonia, the Bristol, built in the 1924, is still in business. The only hotel in the street to survive the 1963 earthquake, it features in the "A Motoring Lesson from Macedonia". The story can be heard on YouTube.
at 01:33 2 comments: