GET A TASTE OF FLORENCE...

The Helvetia & Bristol in Florence is offereing "small, intimate" lessons in Tuscan and Mediterranean cookery under its chef, Enzo Pettè. "Enzo teaches with great passion the simplicity of recreating ancient customs and traditions into a grand contemporary feast," says the hotel where his own preparations can be sampled in the Hostaria Bibendum. The afternoon classes (3–6.30pm) cost 180 euros; 160 if you attend over thee days. For information: Reservation office +39 055 2665554 or email

...and watch the fur fly
Defying the anti-fur lobby, Italian fashion house Fendi showed its winter fur collection at the hotel, with a fur coat as a raffle prize.

WHAT'S THE BEST HOTEL ANNA CHANCELLOR HAS EVER STAYED IN?
"I was filming in Paris and stayed at the Hotel Le Bristol with my daughter Poppy, who was then eight. It was lavish and unexpected and being there with Poppy felt like something out of the book 'Eloise in Paris'." – The actress ("Duckface" in Four Weddings and a Funeral) interviewed in the Daily Telegraph, September 2007
On October 10 Le Bristol was nominated EUROPE'S LEADING HOTEL at the World Travel Awards in Newcastle.

Maybe she should try Rome next...
The Hotel Bernini Bristol in the heart of Rome, has a newly renovated Presidential Suite. On the sixth-floor, it has two bedrooms, two bathrooms, two lounges, a gym and a swimming pool, with a terrace and incomparabvle views over the city, as the picture here shows... 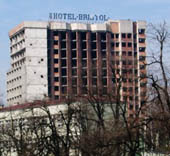 MICHAEL PALIN DIDN'T STAY HERE
The burned out shell of the Hotel Bristol in Sarajevo, not yet recovered from the city's 1,385-day bombardment that ended in 1995, has just been bought by the Malaysian Tradewind hotel group . The company intends to renew the 15-storey 200-room hotel that featured in BBC TV's recent series on Eastern Europe with Michael Palin

MEANWHILE, BELOW STAIRS
Here is a blog about the chambermaids in the smart Hotel Bristol in Geneva where IABC (International Association of Business Communicators) have regular speednetworking evening recently. Hope they have as much fun as the chambermaids seem to have.

The Hotel Bristol in Istanbul was built by the Greek architect Achille Manoussos in 1893. Pera, meaning “beyond” or “across” was the original Greek name for Beyoglu, the area on the opposite side of the Golden Horn from the founding city. It is where foreigners came to live and it is where the Pera Palace Hotel was built, near the Bristol, both favourites for Agatha Christie and other visitors from the Orient Express. In 2005 the Suna and Inan Kiraç Foundation renovated this historical building and turned it into the Pera Museum. It has a permanent collection of Orientalist art, with more than three hundred paintings by European artists inspired by the Ottoman world from the 17th century to the early 19th and including the delightful Tortoise Trainer. Other permanent collections include Anatolian Weights and Measures and Kütahya Tiles and Ceramics, which have lively figurative decorations. The museum also has temporary local and international art exhibitions. If you're passing that way, don't miss it.