Le Bristol in rue du Faubourg St-Honoré provides a setting in Woody Allen's latest film, Midnight in Paris, which opened the Cannes Film Festival this year. Time magazine reports: "Gil Pender (Owen Wilson), a writer who's grown restless piling up the money and credits as a Hollywood script doctor, has come to Paris with his fiancée Inez (Rachel McAdams) and her conservative parents John (Kurt Fuller), in town on a business deal, and Helen (Mimi Kennedy). Ensconced at the posh Hotel Bristol, they hate the city, the rich food, the people; they suspect, on little evidence, that a Bristol maid has stolen Inez's pearl earrings..."
Despite the slur, Le Bristol was happy for the exposure, which included shots of its 160sq m Panoramic Suite, which has a terrace, gum and Louis XV furniture. General Manager Didier Galvez said:"We were thrilled to assist Woody Allen, the cast and crew during the making of Midnight in Paris last summer... and are delighted that Le Bristol features alongside such a distinguished cast." 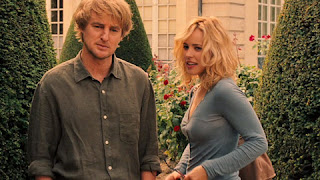 Owen Wilson as Gil and Rachel McAdams as Inez in the gardens of Le Bristol Hôtel
at 03:43 No comments: 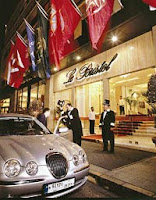 Beirut: Many major political decisions and meetings in Lebanon take place at the Le Bristol in Beirut. On Tuesday, May 17, it became caught in the crossfire, with the result that it felt obliged to put out a statement regretting hosting a conference that showed solidarity with the Syrian government, as it had endangered the well-being of the hotel's employees and customers. It says: "The management learned from media reports that potential protests might take place outside the hotel at the time of the conference, which might pave the way for clashes between protesters loyal to the Syrian regime and others who oppose it."
MTV reported that members of the Baath party and SSNP had visited the hotel and asked to hold a pro-Syrian regime conference at the same time as a conference in solidarity with Syrian protesters. After Le Bristol cancelled the event, the organiser of the conference in support of the Syrian protestors failed to find another venue. Co-ordinator Saleh Machnouk told the Financial Times that 25 Beirut hotels had refused to host the event.