Breakfast with John F Kennedy at the Berlin Bristol

This pictures shows US President John F Kenned,  Mayor Willy Brandt and Chancellor West Germany's Konrad Adenauer in the Gobelin Halle restaurant of the Kempinski Bristol in Berlin in 1963. The Kempinski Bristol had risen from the desolation of the war and opened as modern Germany's first five-star hotel in 1952. The previous Bristol, in Unter den Linden, had been destroyed by the massive allied bombing of the city.

"Even John F. Kennedy appreciated the relaxed atmosphere of our Gobelin Halle," the hotel says , and they now have a special John F. Kennedy breakfast on the menu. It's a modest meal: croisants, fruit salad and a hot drink.

The story of the old Bristol is told in 'Krupp's Dying Shame', Chapter 4 in High Times at the Hotel Bristol.
at 03:48 No comments: 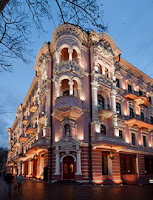 Starwoods is about to open it second hotel in Ukraine, adding the Bristol in the Black Sea resort of Odessa to the Four Points in Zaporozhye, some 500 miles northeast on the Dnieper.
The hotel on Pushkinskaya Street is an elaborate Italianate building from 1894 that we have remarked on before. Renovation for Starwoods Luxury Collection will include a new bar and restaurant plus around 10,000 square feet of meeting space and will re-open in 2014.
It promises to offer "Authentic Travel Experiences to Global Explorers" –- and there was us thinking that, as travel experiences go, it had been pretty authentic up till now, especially when it was the Krasnaya in Soviet times.
at 09:38 No comments:


"How bad a boozer was Brendan Behan?" asks the New York Post of the Irish playwrite, answering its own question with: "Bad enough to get himself banned from both the St. Patrick’s Day Parade and the Bristol Hotel, where he ran naked through the lobby."

This comes from a report today about a new play, Brendan in Chelsea, about 24 hours of his stay in the Chelsea, which was the last New York hotel that would have him. The play is written by his niece, Janet, and its star and director is Adrian Dunbar. It plays at the Acorn Theatre, New York, until Oct 6.

Behan, who described himself as “a drinker with a writing problem”, died in 1964 aged 41.