The new Bristol Hotel in Istanbul 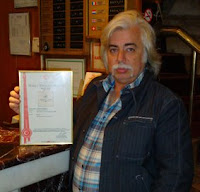 Hippolyte Jammet's battle for the name of Bristol in Paris in the 1920s was not the only time that the name was sought after and won. After the closure in Istanbul of the 19th-century Bristol – one of the original great hotels in the Beyoglu district (see October 2007 post) – hotelier Ali Ihsan Huzmeli (left) sought the name for his hotel in nearby Meşrutiyet Caddesi. This is where Tim Arnold, intrepid hunter of all hotels called Bristol, met him last week. Mr Huzmeli showed him the government certificate he had received after a long process to possess the right to use the name of the former hotel. Mr Huzmeli's Hotel Bristol is a modern hotel with 70 rooms and seven suites, and its sister hotels, all in Beyoglu, are the Grand Hotel de Londres, the Yali Hotel and the Hotel Monopol. Hearing that the Bristol is shortly to undergo renovation, Tim Arnold, a Bristolian, wondered about a Bristol theme – a Clifton Room, Avon Restaurant, Brunel Bar...
Back to the latest news
at 01:39 No comments: