“It has left off raining down in Lincolnshire at last, and Chesney Wold has taken heart. Mrs Rouncewell is full of hospitable cares, for Sir Leicester and my Lady are coming home from Paris. The fashionable intelligence has found it out and communicates the glad tidings to benighted England… Through the same cold sunshine and the same sharp wind, my Lady and Sir Leicester, in their travelling chariot (my Lady's woman and Sir Leicester's man affectionate in the rumble), start for home. With a considerable amount of jingling and whip-cracking, and many plunging demonstrations on the part of two bare-backed horses and two centaurs with glazed hats, jack-boots, and flowing manes and tails, they rattle out of the yard of the Hôtel Bristol in the Place Vendôme and canter between the sun-and-shadow-chequered colonnade of the Rue de Rivoli and the garden of the ill-fated palace of a headless king and queen, off by the Place of Concord, and the Elysian Fields, and the Gate of the Star, out of Paris.”

“By the time we reached the Bristol Hotel in Fahd Al Salem Street [Kuwait City], I had not heard a word of our sales situation in the area, and I was feeling impatient. My irritation increased as soon as I had registered in the hotel. It was the foulest hotel I was ever to visit in my years in the Gulf. It had originally been picked from a list of names.
It would have been a change from the multi-national American-inspired hostelries where I usually stayed, and anywhere in Europe the name Hotel Bristol was almost invariably an assurance of five-star quality, since they derived their name from the patronage of the well-travelled 4th Marquess who bore the title of the great English port. It transpired that this hotel Bristol was a parody of its reputation – a misnomer designed to entrap the unwary traveller – an angler’s deceit in casting his fatal fly – a travesty of all that was true.”

Le Bristol Hotel in Paris has been voted the Leading Hotel in Europe at the prestigious 2007 World Travel Awards. It was also voted Leading Hotel in France, while the Hotel Bristol in Vienna was voted Leading Hotel in Austria. The trophies in the Europe category, pictured here, were presented at the Marriott Hotel Gosforth Park in Newcastle in November. Said a spokesman for the awards, "With thousands of votes cast by travel professionals from 167,000 travel agencies, tour and transport companies and tourism organisations in over 160 countries, winning a World Travel Award has become one of the highest accolades a travel organisation achieve."
The Prince of Wales Suite in Vienna's Hotel Bristol was voted Austria's Leading Suite. It is the largest hotel suite in Austria, with a library, dining room, office, fitness room and sauna. When in Austria the Prince of Wales famously visited a public sauna, appearing naked with his equally naked, and embarrassed, security guards. You can read all about the Prince of Wales and his affair with Wallis Simpson at the hotel in HIGH NOON FOR THE QUEEN'S MOLL, Chapter 6 in High Times at the Hotel Bristol.

Another recent award winner is the Hotel Bristol in Amman, Jordan. At the 7th Annual International Hospitality Awards, the Middle East's major trade show for hotel equipment and food services, the Bristol, which opened in 2001, received 9 awards including a gold for bed-making. General Manager Alfonso Nocero said that that this achievement serves to solidify Bristol's image as a provider of premium quality services.

Back to the latest news 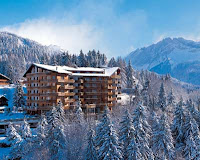 Jonathan Aitken, recently put in charge of the Conservative Party’s task force on prison reform, may reflect that he owes his appointment in part to the Hotel Bristol in Villars, Switzerland (right). In 1993 Mohamad Al Fayad, owner of the Ritz hotel in Paris, told the Guardian newspaper that Aitken, then Minister of State for Defence Procurement, had been staying at his hotel, and his bill had been paid by Saudi businessman Said Ayas, adviser to King Fahd’s son, Prince Mohammed. Aitken denied this, claiming that his wife, Lolicia, had paid the bill, and he sued the paper. The case looked as it was going his way until the eleventh hour, when Al Fayad revealed the log of phone calls made by Aitken from the Ritz on the morning of his departure, including calls to the Hotel Bristol in Villars. A Guardian reporter sped to the hotel where he found its papers in boxes, as it was going through a change of ownership. For three days he sifted through them until he discovered that on the day in question Lolicia Aitken and her mother had been staying at the Swiss hotel – so they could not have been at the Ritz to pay the bill. Jailed for perjury, Aitken served seven of his 18-month jail term, providing him with the basis of his new career.
For the full story, see The Minister Who Didn't Pay his Bill

LORD BRISTOL, 'CUNNING CRIMINAL'
The National Archives have recently opened their files on Victor Frederick Cochrane Hervey, 6th Marquess of Bristol, father of society limelighters Victoria and Isabella Hervey. The report by the Metropolitan Police CID, , dated January 2, 1946, came in reponse to an anonymous letter-writer's claim that he was behind "almost every jewel robbery in the metropolitan area and within areas outside London"and was "one of the most unscrupulous, calculating and cunning criminals at large". No evidence was found against him and the investigating officer concluded. "Although vicious to almost a sadistic degree, I am certain he would not be fool enough to carry firearms.". An account of the court case in which Hervey was jailed for three years for two Mayfair jewellery robberies in 1939 is the background to Paris Hilton and Victoria Hervey, one of the stories in High Times at the Hotel Bristol.