Lord Bristol's daughter and the Devonshires 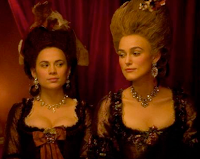 The Duchess, the 2008 film of Amanda Foreman's book Georgiana about the Duchess of Devonshire, was aired on BBC television on August 24. It starred Keira Knightley (above right) as the Duchess and Hayley Atwell (left) as Elizabeth Foster, who lived in ménage a trois with the duke (Ralph Fiennes) and duchess. Elizabeth Foster was the daughter of the 4th Earl of Bristol, who gave his names to scores of hotels around the world.  A descendent of hers (and his) is Anna Wintour, long-serving editor of Vogue.
at 22:38 No comments: