Tourist board celebrates the Colombo Bristol 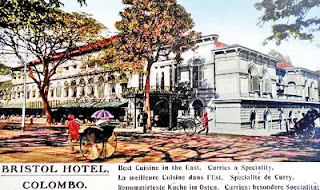 The Ceylon Tourist Board is 50 years old this month. To mark the occasion the Sunday Times of Colombo, Sri Lanka, published a piece about the great days of travel when holidaying was “a genteel affair”. Its main photo is a postcard of the Hotel Bristol, seen here, which is included in a round-up of the grand Victorian hotels. Its first managing director was William Tudor Stephen Saunders, who had arrived in Ceylon in 1868 and worked as a planter before he sold his plantation and settled in Colombo. He left the Bristol Hotel in 1901 to become managing director of the Grand Oriental Hotel.

The Hotel Bristol in Columbo is the setting for Postcard from Mark Twain, a chapter in High Times at the Hotel Britsol.